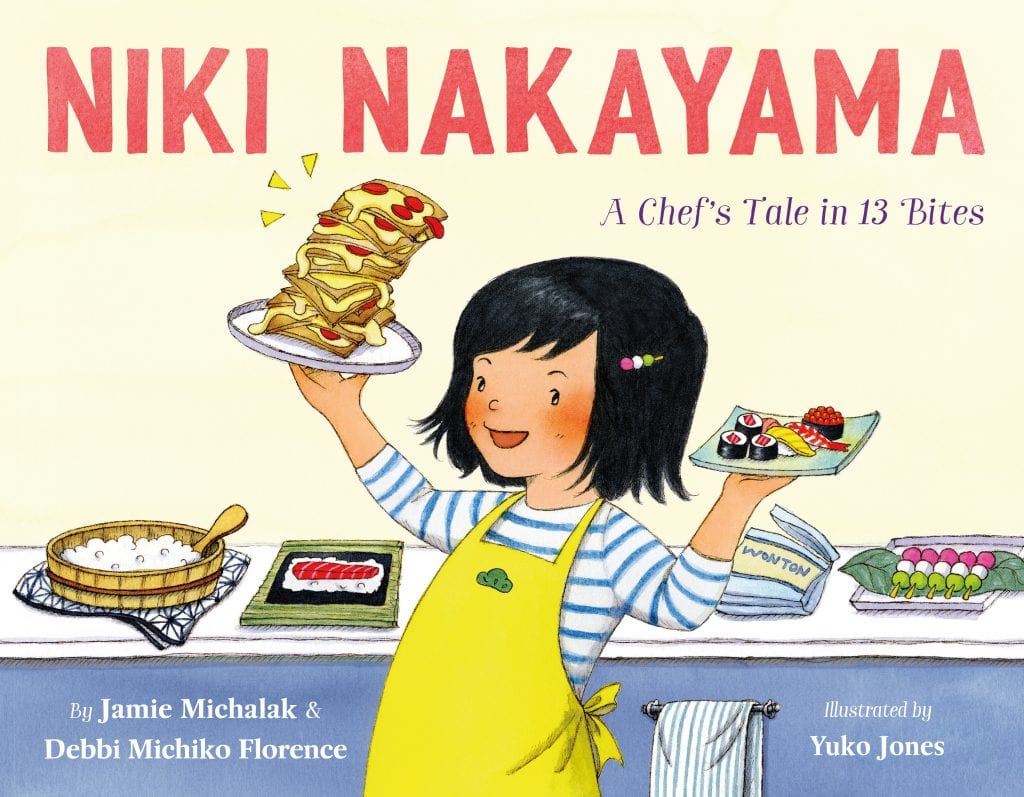 Niki Nakayama: A Chef’s Tale in 13 Bites is a picture book biography that tells the story of the powerhouse female Japanese-American chef and her rise to fame

As a child and adult, Niki faced many naysayers in her pursuit of haute cuisine. Using the structure of a traditional kaiseki meal, the authors Debbi Michiko Florence and Jamie Michalak playfully detail Niki’s hunger for success in thirteen bites — from wonton wrappers she used to make pizza as a kid to yuzu-tomatillo sauce in her own upscale Los Angeles Michelin-starred restaurant, n/naka.

To anyone who tells her a woman can’t be a master chef, Niki lets her food do the talking. And oh, does it talk. Niki was featured on the first season of Netflix’s culinary documentary series Chef’s Table. And Chrissy Teigen proclaimed that Niki’s restaurant was one of her absolute favorites.

A smart, strong woman with starpower, Niki is only just getting started — like the young readers who will devour this book, featuring illustrations by Yuko Jones!

“Art, storytelling, and food work together on so many levels in this beautiful tale about master chef Niki Nakayama’s life.”

“In 13 “Bites,” the duo follows Nakayama through food-centered memories, including bonding moments with her grandmother, embarking on a post-high school Tokyo food tour, and trying and then studying kaiseki at a cousin’s ryokan. “There, Niki was served a meal of/ many courses. One by one,/ the dishes flowed like a stream,” much like the book’s prose. Mixed media and digital art by Jones make each vignette atmospheric, with varying angles and insets, toothsome details, and watercolor washes.”

“This empowering picture book biography is both lively and thoughtful, and a strong choice for primary grade readers who enjoy exploring culture through food…”

“Determined heroine, delightful story, delectable illustrations: Both young readers and their adults will be inspired and charmed by every spread of this book.”
–Linda Sue Park, Newbery Medalist and New York Times-bestselling author

“A flavorful, inspirational biography of a woman who showed the world what she could cook up.”

More about the book